Do You Have an Emergency Fund?

Income, expenses, debt, and a savings fund. These are the four items that should appear on every personal budget. You need your income included of course, so you can know how much to spend. You also need your expenses and your debt repayment on there so that you can know how much of that income you’re giving away. But you also need a column in there for an emergency fund. That lifesaving account that’s stockpiled with cash, so that you can still have some security when that rainy day comes. But according to a new a poll taken by CIBC, nearly half of Canadians aren’t including a column for the fund on their personal ledgers.

In total for the nation, only 45 per cent of Canadians have this kind of fund set up. And as you can see from the chart below, British Columbia was the most likely to have funds set aside for an emergency; while Ontario and Alberta were the least likely provinces for residents to have something set aside. 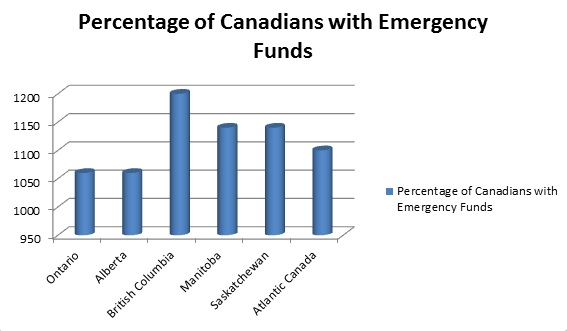 There are a number of reasons why people don’t have an emergency fund set up. Whether it’s because they don’t think they have enough money, or they simply don’t know how to do it. Below are some steps you can take to make sure that when your rainy day comes, you’ve already set up the umbrella for it.

Decide how much you want to spend
Lots of people have lots of different opinions on how much you should put into your emergency fund. $1,000, $5,000, six month’s worth of living expenses – these are just some of the most popular options. What’s important though, is what works for you and what amount you want to save.

If you want to know that you’ll be able to live off your emergency fund for three or six months, you’re going to need to know how much that’s going to be. And so you’re going to need to calculate your expenses, and then multiply them by the amount of months you want security for. This is how much you’ll need to save. Of course if you’re working off a fixed number (such as $1,000 or $5,000) you’ll easily know how much you need in your fund.

Open an account
Opening an account may sound easy, but it’s going to take some digging on your part. You’re going to need to know which accounts are going to return you the most interest; and you want to stay away from anything that will lock your money away, such as an RRSP. High-interest savings accounts are the best option.

Don’t be too stressed about it if you don’t currently have an emergency fund – almost half of Canadians don’t. But do make sure that you take the necessary steps to get one started. That rainy day comes for everyone at some point or another; and you’ll feel much better about it if you’re prepared.