When Lunchtime Comes, do you Buy or Bag?

Take a walk on any downtown Toronto street at just after noon on any given weekday and you’re likely to see one thing: the lunch crowd. People rushing to get to the nearest restaurant or cafe, businessmen and women scuttling by with their coffee cups tightly gripped (and maybe even a sandwich stuffed in between wrappers,) and people standing in line at food trucks to put in their order. When you’re in Toronto, there are as many ways to grab your lunch on the go as there are restaurants to provide them. But as you walk down that busy Toronto street filled with the lunch hour crowd, how many brown bags do you see?

The chances are slim that you see any; and if you do, they are barely visible among all of the take-out containers. This is according to Visa Canada, who’s just released a survey showing just how many Canadians are buying their lunch at work, and how much it’s costing them.

A quick look at the graph tells you how many of us, by province, are saving money and bringing our lunch to work. As you can see, Ontario is the province least-likely to brown-bag it. 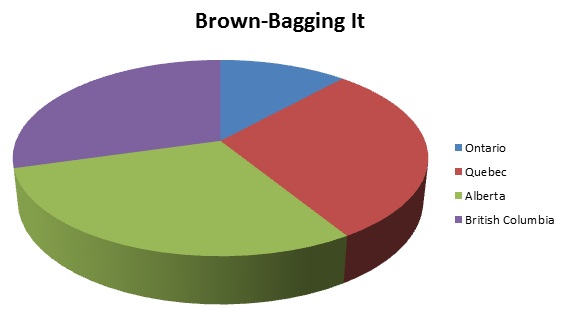 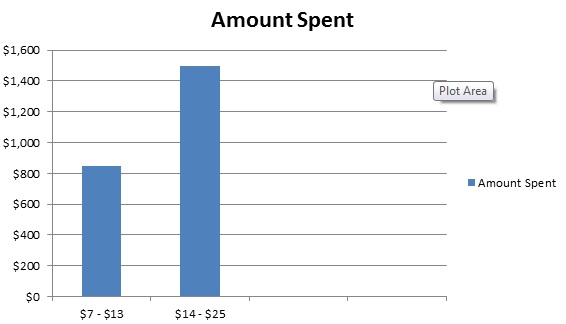 For those that spend anywhere in the second category, between $14 and $25 a meal, the costs add up to be about $1,500 a year. That’s a lot of hard-earned dough that we’re spending – on dough.

But, it didn’t always used to be this way. And if you enter a diner or restaurant on your lunch hour today, it’s likely that you’re going to see a good deal more younger people than you’ll see older.

“For older generations,” says Rona Birenbaum, a financial planner at Caring for Clients, “the natural thing to do is to cook a meal every nighth and take leftovers the next day. Now, in the city, going out becomes part of work life.”

She also says that it’s easier to eat out when every other door to a business is a restaurant (such as is the case in Toronto,) and when credit and debit cards make a convenient lunch even easier. But, Ms. Birenbaum says that buying your lunch isn’t all bad.

“As much as the $8.80 lunch seems like a lot of money, you have to factor in the value of the social exercise and what it adds to people’s lives,” she says.

Kerry Taylor, a blogger at Squawkfox and someone who has converted to bringing her lunch, agrees. “So what if you want to spend $15 a couple times a month? If you plan it, then by all means, dine out. But for the rest of the time, it pays to do the math.”