The past month of July was one of the hottest on record (since 1999) in Ottawa, and it broke the record for also being the driest month on record – ever. Ottawa saw just over half an inch of rain in a total of 31 days. That little rain that did come was dispersed over a three day period, and didn’t even hit the entire city. Things are hot, and they are dry. What’s going on in Canada’s capital city is reflective of what’s happening in the rest of Ontario and throughout the country. Canadians are starved for rain and the farmers are doing everything but rain dances in their crops. It’s drought season. And it’s not just happening here at home. 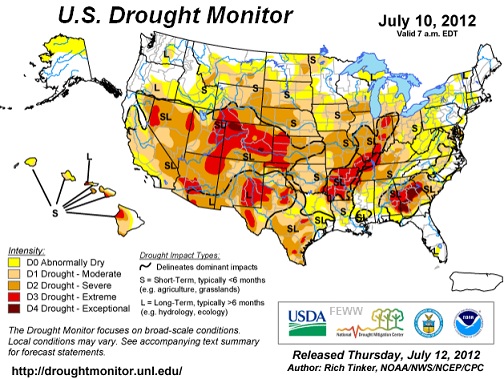 What’s happening in Canada right now is happening even more so in the United States. Looking at the above map, several states, especially in the midwest, are also experiencing a severe (if not extreme) drought; and it’s affecting their corn and soybean crops, which is definitely going to affect us here in Canada. And this, says RBC economist Paul Ferley, is happening at a time when food prices were expected to start to go down.

“Growth [in the U.S.] is slowing, so we would have expected a bit of moderation in commodity and food prices, but because of the drought it looks like we’ll be getting another wave,” says Mr. Ferley.

While all crops are being hit hard with the dry weather, corn is one that’s felt it the most, with withering crops scattered throughout the U.S. Corn plays a huge role in farming though; and when these crops start to go, it affects everything.

“This will trickle through the cost of production for food, and eventually will have an impact at the grocery store,” says Patricia Mohr, commodity markets specialist at Scotiabank. “It’s hard to say exactly when this will show up.”

Trickle down indeed. Once that food supply starts diminishing (which it already has,) cattle become harder to keep; and so, the price of beef and pork go up – in the States, and here at home. Chickens and other poultry also feed on corn quite often, and so prices here could start to rise as well. But it’s not just meat that we have to worry about.

Ms. Mohr says that the price on pasta and bakery items could go up, because the drought will also affect things like wheat production. Fructose and corn syrup, two items which rely on corn for production, will also become more expensive, upping the ante on processed foods, as well. And, even things like mayonnaise and salad dressing are in being danger of getting hit with higher prices. This is because canola, the plant that’s pods are crushed to create canola oil, is also suffering from the lack of rain.

With these drought conditions, along with our own hot and dry weather here at home, are certainly going to mean that we’re going to start seeing some higher prices. But when? Will they really go up by as much as 3.5 per cent in the next four months?

They could. For some Canadian food sellers it’s already started happening.

Tim Horton’s has already raised the prices of their muffins by $0.05 cents a piece; and sandwiches have been raised by $0.10. Upon raising their prices, the coffee chain announced it was due to higher food and operating costs.

And Michael McCain, CEO and president of Maple Leaf Foods, has said that while he doesn’t when it’s going to happen, his company is also going to be increasing their food prices.

“We don’t know exactly what the extent or the timing is of any price increases attached to this because the story of this year’s crop conditions is still not fully told,” said Mr. McCain. “As this unfolds into the fall we’ll have a better picture.”

He went on to say that Maple Leaf Foods purchases its ingredients before they actually need them; which could mean that higher Maple Leaf prices won’t come until the end of this year at the earliest.

But it’s still unclear as to whether or not Canadian consumers will have to pay the price. Even with rising food costs, consumers will simply stop shopping somewhere if it becomes too pricey for them. And Mr. Ferley says that this is definitely something that grocery stores take into consideration when setting their prices. Mr. Ferley also points out that the major grocery store chains in Canada – Loblaws, Metro, and Sobeys – all face competition, and it’s not just coming from each other. With other stores such as Wal-Mart and now, even Shoppers Drug Mart, offering food items, grocery stores are seeing less opportunity to cash in on their commodity all the time.

“Competitive pressures could temper the ability of retailers to pass through these cost increases,” says Mr. Ferley.

So what’s the lesson for Canadian consumers? If you don’t like the prices at your grocery store, go somewhere else; the chances are good that the stores will start to take notice. And in the meantime? A little rain dance probably couldn’t hurt.