It really seemed as though Toronto was untouchable, didn’t it? And that no matter what kind of new rules they imposed on Toronto mortgages, nothing was going to get in the way of this market or slow it down. But now, with lower home sales and listings in July, August has also seen a slowdown happening in the city. And it seems those new rules are having an effect even here.

By looking at the chart below you can see how vastly different the last month of summer was last year for the GTA from what was seen this year. And while July may have seen the biggest drop in single-family homes, August saw a decline in both high-rises and low-rises. 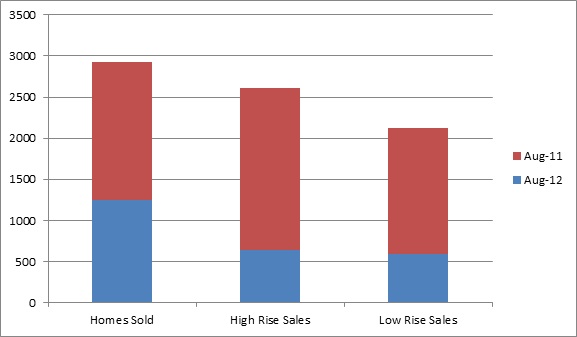 The chart shows the current figures brought in by RealNet Canada Inc:

“The federal government has been working on reducing household debt and recently adjusted mortgage lending rules. August was the first full month with the new rules in place and it appears these regulations have affected consumer confidence, resulting in significantly reduced sales of new homes.”

But BILD is right. These were exactly the sort of changes Finance Minister Jim Flaherty wanted to see. When he changed the mortgage rules he pointed to the GTA specifically,

“In Toronto in particular what I’ve observed and heard about from developers is continuous building without restriction because of persistent demand. This concerns me because it’s distorting the market.”

Mr. Flaherty had also said in the past that he was “concerned about the last condo buyer in Toronto.”

With these new stats, it would seem as though Mr. Flaherty can take a little break from his concern. His new rules have dampened demand just as he intended. And the Toronto housing market is finally starting to show it.