A new survey conducted by PwC shows that most Calgarians think that Calgary mortgages are affordable. And that they’re even more affordable than renting. And if you look at recent stats coming out the Calgary Real Estate Board, that’s probably true. Both results combined, experts say, are just another indication that Calgary is actually one of the only areas in the country right now bucking the trend of a cooling market.

The chart below shows just how affordable Calgarians think it is to carry a mortgage in their city. More than half think it’s affordable, with 4% saying it’s “very affordable.” One-third of residents think that mortgages within the city are beyond their financial means; but only 8% of those think that Calgary housing is “not at all affordable.” 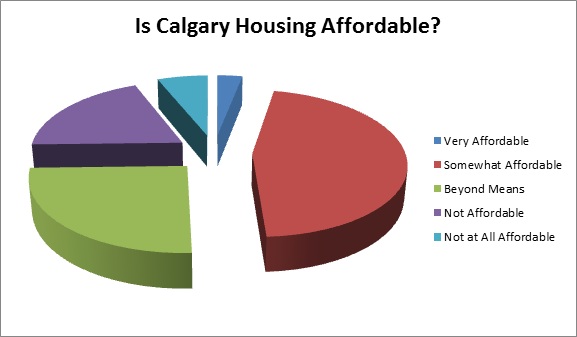 So with two-thirds of the city thinking that housing is more affordable than renting, is it really? Aryn Flette, a homebuyer in the city thinks so.

“I do think that it is affordable right now as opposed to renting,” she says. “I did research into renting and I found that in the same areas that I was looking to rent, the mortgage would be about the same. So I thought it would just make more sense to make the investment and put my money towards an asset. I probably will make my purchase within the next month.”

The affordability of a home in Calgary right now just speaks to the stability of the real estate market here. While the rest of the country seems to be walking a fine line between home prices spiking out of people’s reach, and home values actually dropping in the next few years, Calgary’s walking that line just fine. The chart below shows the recent MLS sales prices for different types of Calgary homes. When compared with last year’s data, single family homes have increased 2.21%; apartment condos have increased 2.68%; and condo townhouses have increased 1.67%.

These healthy increases are due to the booming economy that Calgary is once again starting to enjoy.

“Calgary has a robust economy with strong fundamentals,” he says. “Employment, income growth, and migration coupled with a high quality of living make Calgary a desirable place to call home. I have many clients moving to Calgary from all over Canada, and the rest of the world, for these very reasons.”

There’s no doubt that oil industry, largely based in Alberta, continues to be a source of profit for the economy in this area. Along with the oil industry, the building, construction, and housing industry continues to pour profit and job opportunities into the economy. And these factors, along with immigration levels into the city that haven’t been seen in several years, all mean that Calgary is simply one of the best places to be in Canada right now.

Will van’t Veld, an economist with ATB Financial, says in the second quarter of 2012, Alberta saw 20,000 inter-provincial migrants that “all need places to call home.”

“This is more than the previous three years combined, and puts 2012 on pace to record boom-time level migration numbers,” he says. “Inventory levels and building rates were still strong, meaning dramatic price hikes aren’t likely in the cards. But the migration boom will likely offset most of the drag on the market engineered by the federal government through changes to mortgage insurance requirements.”

Battershill agress, saying that the new mortgage rules will have little affect on the housing market here. As more people continue to come into the city, he says, it means rental demand is up, making owning very equal in cost to renting.

“While the mortgage rule changes and continued economic volatility worldwide have impacted certain parts of the country, Calgary has gone against this trend,” says Battershill. “Affordability remains high in Calgary with low interest rates and good job growth. As more people move to Calgary, rental demand has increased, making the cost of owning very comparable to certain types of rentals. The bottom line is that Calgary is an affordable place to own a home relative to jobs, incomes, and opportunity.”

But it’s not realtors and homebuyers in the city that believe housing is affordable here.

the RBC Economics Research report that was published in August also said that Calgary was one of the most affordable areas in Canada to live. This Housing Trends and Affordability Report stated that everything really is working in Calgary favour right now, including strong home resales and building, steady but not drastically rising home prices, and attractive and improving affordability.