While cities all over the country might be facing a problem of overstock inventory on their housing market, and few buyers for them, Calgary is experiencing a different problem. That is the fact that while more and more people are pouring into the city every year looking for a new home, Calgary is simply running out of them. And that’s leading to a huge increase in homelessness in the city.

Calgary saw a rise in homelessness of 12 per cent in just eight months from January 2012 to August 2012, says the Calgary Homeless Foundation, and is indicated by the chart below. 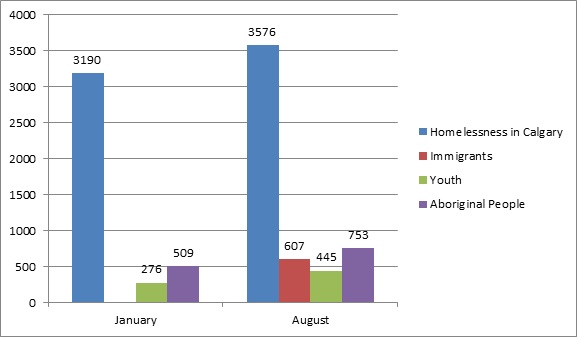 That’s a huge increase, and ironically, it’s due to the fact that Calgary is one of the most affluent Canadian cities right now. More and more people are coming here looking for work every single month, and those people not only need a job, but also a place to call home – whether that’s through a Calgary mortgage or just a place to rent. The problem is that with the influx of people, neither are readily available on the market right now. And while the jobs might be there, that doesn’t always mean that they’re the highest-paying jobs. That’s leaving some short on the funds needed to get a home.

“People are coming here for work and they are finding work,” says John Rook, CHF’s president. “But they can’t find housing that they can afford. If your rent is $1,100 a month, but you’re only earning $10 an hour, things aren’t going to add up for you.”

Mr. Rook said that from their survey results, 17 per cent of people had just moved to Calgary, having been in the city for less than one year. He also pointed to recent stats which show that Alberta welcomed 30,000 immigrants this year.

“It’s a unique, Calgary problem,” he continues. “But the city can’t keep up with the immigration in terms of housing.”

The city does have a few places to find relief, but it’s not nearly enough. The Calgary Drop In Centre has been added to help fight the problem of homelessness; and Calgary receives about $45 million from both the federal and provincial governments solely to help them with homelessness. Mr. Rook says that while it may not be enough, that help certainly hasn’t gone unnoticed.

“We are very thankful that the province continues to see both the human need and the business case to provide housing and support, compared with individuals staying for prolonged periods in shelters and more expensive institutions,” he says. “We have evidence it is cheaper and people are better able to work on the issues that led to their homelessness, and become more productive citizens from the safety and security of a home.”

As the temperature continues to drop outside, the city is currently making plans to add 200 – 250 more beds within its shelters.

But, there’s another issue in all of this that also has Mr. Rook’s attention.

This problem too, is also indicated by the chart shown above.

What do you think? Are you a Calgary resident? Have you noticed the problem of homelessness growing just this past year? Other than the beds and shelters being put in place, what do you think are some answers to this problem of the City’s?