The mortgage rules that went into effect on July 9th have gotten a lot of talk. Much of the chatter has surrounded the new rules on mortgage insurance; closely followed by new regulation applied to home equity loans, HELOCs, and home refinancing. But there was another rule announced at the same time that hasn’t gotten nearly the attention of the other two – that’s the rule stating that mortgage insurance would no longer be available on luxury homes.

The chart below shows the figures given by Realtor Mike Fotiou; and they definitely show that there have been more luxury home sales in Calgary than there were at the same time last year. Not only that, but they’re the highest levels of luxury home sales the city has seen in the past five years – showing that while markets may be cooling in some markets, even luxury Calgary mortgages are in higher demand than maybe anywhere else in Canada. 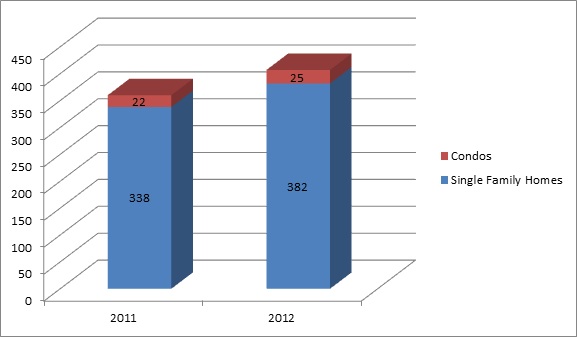 Developments such as the one at Watermark at Bearspaw are just one example of how well luxury homes are doing in Calgary.

This development is comprised of luxury homes, built by three different builders and with three different showrooms for each, come not only with all the luxury amenities and indoor space that you’re looking for, but a ton of land, too. In fact, each lot here is 82 feet wide; with no fewer than 25 feet in between each home. In total, there will be 469 lots and 101 villa units available within the development.

“It blows people away,” says Matthew Jones, associate vice-president of sales and marketing for Macdonald Development Corp. “Thee’s a lot of room to spread your arms and breathe.”

But what might be even more impressive than all that space, is how well the project has sold so far. Only in its first phase, the first 108 lots are already 70 per cent sold – and that’s without one showroom being built to allow buyers to actually walk in, feel the finishes, and get a feel for the layout. Imagine how much they’ll sell once those showrooms are built. That will be sometime next year, as they’re expected to break ground on them in the summer of 2013.

This is just one of the projects in Calgary that is helping boost the sales of luxury homes in the city. And from the stats showing that these homes are on an upswing despite the new mortgage rules working against them, and the fact that Calgary seems to be the exception to every rule in the Canadian housing market these days, it wouldn’t be surprising to see these numbers go even higher.