The Picture of Provincial Debt in Canada: Part 3, Alberta

Before the 1970s, Alberta was known as The Bible Belt of Canada. It was here that church attendance was the highest, and the right-wing philosophy certainly played along with Biblical family values. Much of this may still be true today. But when you’re speaking about Alberta in 2012, it’s likely not images of Bibles or churches that come to mind – it’s more likely money, oil, and wealth.

That’s because the era of the 70s was a big one for Alberta. People were coming from all over Canada to drill newly-found oil that was found here, and they hoped to strike it rich. Many of them even did. Geologist Jim Gray, who discovered the Elmworth Deep Basin in Grand Prairie, Alberta, remembers it fondly.

“Let’s drill that well. Let’s take that land. Let’s not talk about this for the rest of the day. And let’s not have a bloody committee. And if we fail, we fail big. But if we win, we’re gonna win big.”

Mr. Gray, along with his business partner, John Masters, won big indeed. The Elmworth Basin is still very much alive and thriving today.

It wasn’t the first time oil was found in the province. That had already been done decades ago in 1947, when Imperial Oil made the province’s first really big oil strike. But it was exactly the right time for even more oil to be found.

That’s because of foreign conflicts that were occurring between Egypt, Syria, Israel, and the United States in 1973. While Egyptian tanks moved into Israeli territory, Israel fought back. They were backed by the United States, who gave them both official support as well as military support. This lead to Kuwait leaders holding off on oil exportation, hoping that it would get the United States, and other supporters of Israel, to back off and to stop protecting Israel.

This was in October of 1973, and oil prices soared through the roof, going from $3 USD a barrel to $15 USD a barrel, and in the span of just a day. Things only got worse by the end of the month, as Iran, another major source of oil, broke out in civil war. Oil went up to a whopping $40 USD a barrel.

But here at home, at least in Alberta, the oil boom was still going on – and at a faster pace than ever before. Over 700 oil companies were about to emerge (that’s how many the province has today,) and thousands of people were flocking to Alberta. It was here that money grew on trees – and everyone wanted to get out a basket and start picking. Alberta’s population grew by one-third during that decade.

“We would work seven days a week, sixteen, twenty hours a day,” says Dwayne Mather, who worked on one of the many oil rigs during this time. “I was young and full of all kinds of ambition, and it was a great, great time.”

A great time, indeed; and anybody in Calgary or Edmonton will tell you so. It was these two cities that profited the most from the oil boom, and became almost completely transformed.

In just a few years, Calgary had issued over $1 billion worth of construction permits for new housing – even more than either Chicago or New York had going for them. As more and more people continued to come from out East (especially Ontario and the Maritimes) rental vacancies went down to almost zero. It was not only a great time for oil, but a great time for real estate in the province, too.

With so many people coming to the province, and to the two biggest cities within it particularly, the housing market boomed. And it wasn’t just because all those oil executives needed a place to live, either. This increase in property resulted in something else – a real estate boom, which only added to the richness and wealth that the province was becoming known for. Because of this second boom, professionals started coming from all across the country. Dentists, lawyers, doctors, and folks from just about every other profession started making their way out West – where there was lots of money to be made in real estate.

But it wasn’t just the big players that were taking advantage of the new-found wealth. Jim Gray says,

“Everybody wanted to be in a big building. Everybody wanted to have a corporate airplane. Young people with two or three or four years experience were getting together with some other friends and starting their own little oil and gas company.”

But what goes up must come down, and it happened in Alberta, too.

By the early 80s, the boom was over. A worldwide recession had hit, and by 1982 Dome Petroleum, the largest oil company in not only Alberta but all of Canada, nearly went bankrupt and had to be bailed out by the Ottawa government. Oil companies simply weren’t experiencing the profit that they had just 10 years earlier; and it took a massive toll on the province. 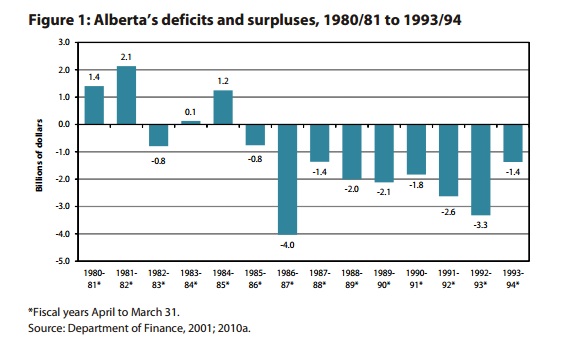 In just two years time, Alberta started to look just like any other province in the country. Unemployment shot up to 10 per cent from the previous 4 per cent, and the local newspapers were crammed with advertisements of homes for sale. People became so desperate to sell their home that often the home would come with everything still in it – including the cars in the garage.

At that time there were 2.3 million square metres of office space that sat empty in the province. And those real estate moguls? They had all returned to their former professions. For the first time in ten years, people were leaving Alberta by the droves, not entering it. In fact, there were more people fleeing Alberta than there were coming in.

It was a trend that would continue for another decade. Oil prices sank further in 1986, putting the province even more behind, and leaving it struggling even more, than it was in the previous years.

It wasn’t until the Klein government took over the province in 1992 that things really started to turn around.

Klein made some moves during his first tenure as Alberta’s premiere, making some cuts to federal spending and cutting out some social programs across the province. Some, mostly Liberals, called Klein out for these cuts, saying that they were unnecessarily hurting Albertans. But these critics didn’t know what they had coming.

It was in 1997, when Klein got re-elected, that he really took huge chunks out of Alberta’s debt. He started severely slashing arts and health programs, and even had many hospitals demolished, which in turn laid off thousands of nurses. The Conservative Klein government also took the public provincial phone company, AGT, and sold it off to private companies. Klein made cuts, and big ones, and they directly affected the people of Alberta.

Klein’s critics painted him as an uncaring premiere, and one who didn’t understand the needs of the province. His supporters on the other hand, pointed out that Klein was simply trying to get the province’s debt under control. And that this was the only way to do it. 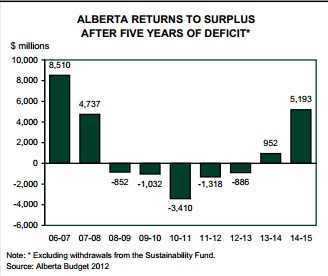 But did it continue this surplus in later years?

Unfortunately not. Just like two decades prior, a worldwide recession hit, and commodity prices for oil and gas plunged drastically. Throughout the recession, Alberta actually did better than much of Canada, but it also took much longer to come out of it than most of Canada. Luckily, it only lasted for a few years, until the 2010-2011 fiscal year when Alberta started to once again see growth. Still not in a surplus, that would have to wait another few years, but the provincial budget was definitely starting to edge more towards the black.

Even with the problems they’ve encountered, Alberta still stands in a very good position. Currently the provincial government is considering whether or not to save the surplus in the Heritage Fund, or to spend it on getting some of those programs back that had to be cut.

While this may be seen as a dilemma by those in the province, it’s a concern that other provinces might call “a rich man’s problem,” and a position that many other provinces can only envy.

The major cities in Alberta are:

Later, we’ll be delving into each of these cities, and seeing just how much debt each of them is in.