While there has been panic surrounding the national housing market in December, there’s been one city that’s been shunning all trends; and it might not surprise you to know it’s Calgary.

Calgary was in fact, the only city in the entire country that saw year over year gains in their market during the month of December 2012. As you can see from the chart below, while the rest of Canada saw only moderate increases in things such as sales and prices, and sometimes even a decline, Calgary continued to outperform once again. 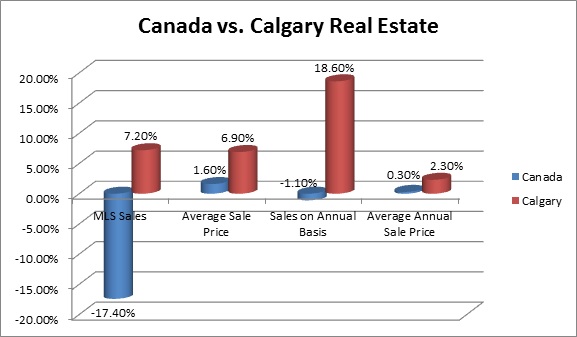 The stats, provided by the Canadian Real Estate Association, break down as such:

“Calgary bucked the national trend in 2012 as the market began to come alive, while others began to enter a long sleep. This occurred because of two main influences,” Don Campbell, senior analyst at Real Estate Investment Network, said. “Over the previous three years, Calgary had not over-performed its underlying economic fundamentals like many other major markets across the country, especially Vancouver and Toronto. A lack of new housing being poured into the market also helped to keep the average sale price in check.”

The question is: will the trend continue. Although currently, this isn’t even much of a question. According to the Calgary Real Estate Board, January sales are already up 9.97 per cent when compared with the same time period last year.