How Active is Your Neighbourhood?

James Sallis is a psychologist in San Diego that has recently studied the effects of neighbourhoods on our own physical fitness, health, and overall well-being. The results that he found were interesting and although American, probably fit very well within what we can expect out of Canada’s neighbourhoods, as well. The Montreal Gazette has put together a nice infographic outlining Mr. Sallis’ results. 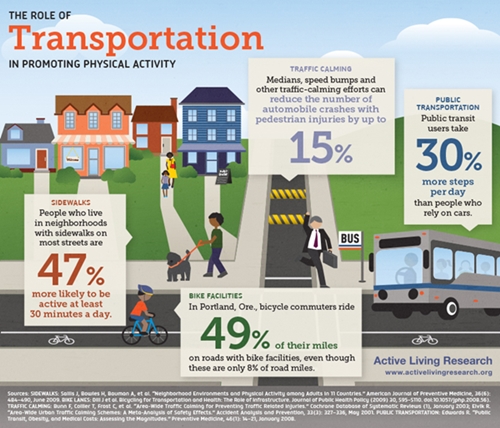 As you can see from the infographic above, when neighbourhoods are equipped with sidewalks on most of the streets, residents in those neighbourhoods are typically 47 per cent more likely to be physically active for at least half an hour every day. Neighbourhoods that are equipped with bus stops are also attractive, as residents who use public transportation take 30 per cent more steps a day than those who mainly depend on their own vehicle for transportation. And the survey also found that communities with “traffic calming measures” such as medians and speed bumps also have 15 per cent fewer automobile-pedestrian crashes than neighbourhoods that do not.

And that’s not all Mr. Sallis found. He also discovered that those who live near trails are 50 per cent more likely to meet standard guidelines for physical activity; and that when school playgrounds are kept open on nights and weekends, children are 84 per cent more active than when these amenities are not there.

But just what is a walkable community?

They’re communities and neighbourhoods featuring schools, parks, stores, and recreational facilities – all accessible by active transportation, which includes riding a bike or walking but not driving. Walkable neighbourhoods are also known for their abundant supply of skating rinks, walking paths, bocce courts, tennis courts, parks, and many other activities that gets everyone in the community active and fit.

What do you think about the idea of a walkable neighbourhood? Is it something that every community today needs to include? Or is it just too impractical to ever be a reality?