RRSP Contributions Down Around Country

One of the main headlines lately has been how this year, there are fewer Canadians making RRSP contributions than last year. When we came across the article in the Financial Post, we had to share not only the stats they had, but also the expert opinions within that made guesses as to the reason for the lower contribution amounts. 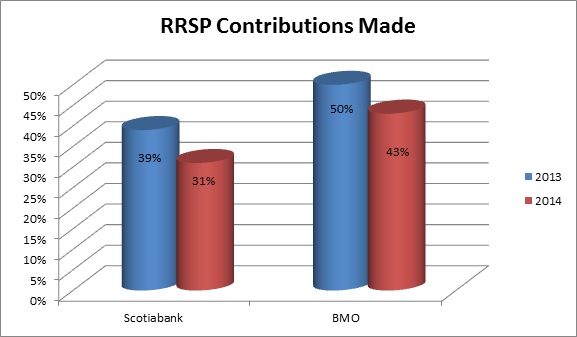 As you can see from the chart above, two of the major banks in the country – Scotiabank and BMO – are reporting that RRSP contributions are down this year from last; and they’re down fairly significantly. But the reasons for it aren’t just because we’re procrastinating. It’s because we’re drowning in debt.

“The top answer was that they did not have enough money to make a contribution,” says BMO’s Chris Buttigieg, senior manager at Wealth Planning Strategy.

And Scotiabank senior vice-president, Mike Henry, also said that this was the prime reason they saw contributions drop.

“They can’t afford it,” he says. “They’ve got other expenses or other things they’re trying to manage.”

He also added that about 75 per cent of his clients informed him that it’s not because they don’t want to contribute to their retirement. They do, they just don’t have the funds readily available to do it.

This data also comes on the heels of recent national news that stated that Canadians are less in debt than they were in years before. That’s good news, considering that we’ve been getting constant warnings from the Finance Minister and the Bank of Canada governor to do just that. Now though, with nothing pumping up our retirement savings, is it affecting our future?

“In some ways, maybe [these warnings are] the unintended byproduct of some of the constant hectoring we have seen in recent years from various officials in Ottawa about the building up of debt,” says Doug Porter, chief economist with Bank of Montreal.

But the other side of the coin is that if you are in that much debt, it is going to affect your future at some point.

What are you doing with your RRSP contributions this year? Would you rather save for your retirement, or pay off as much of your debt as you can right now?