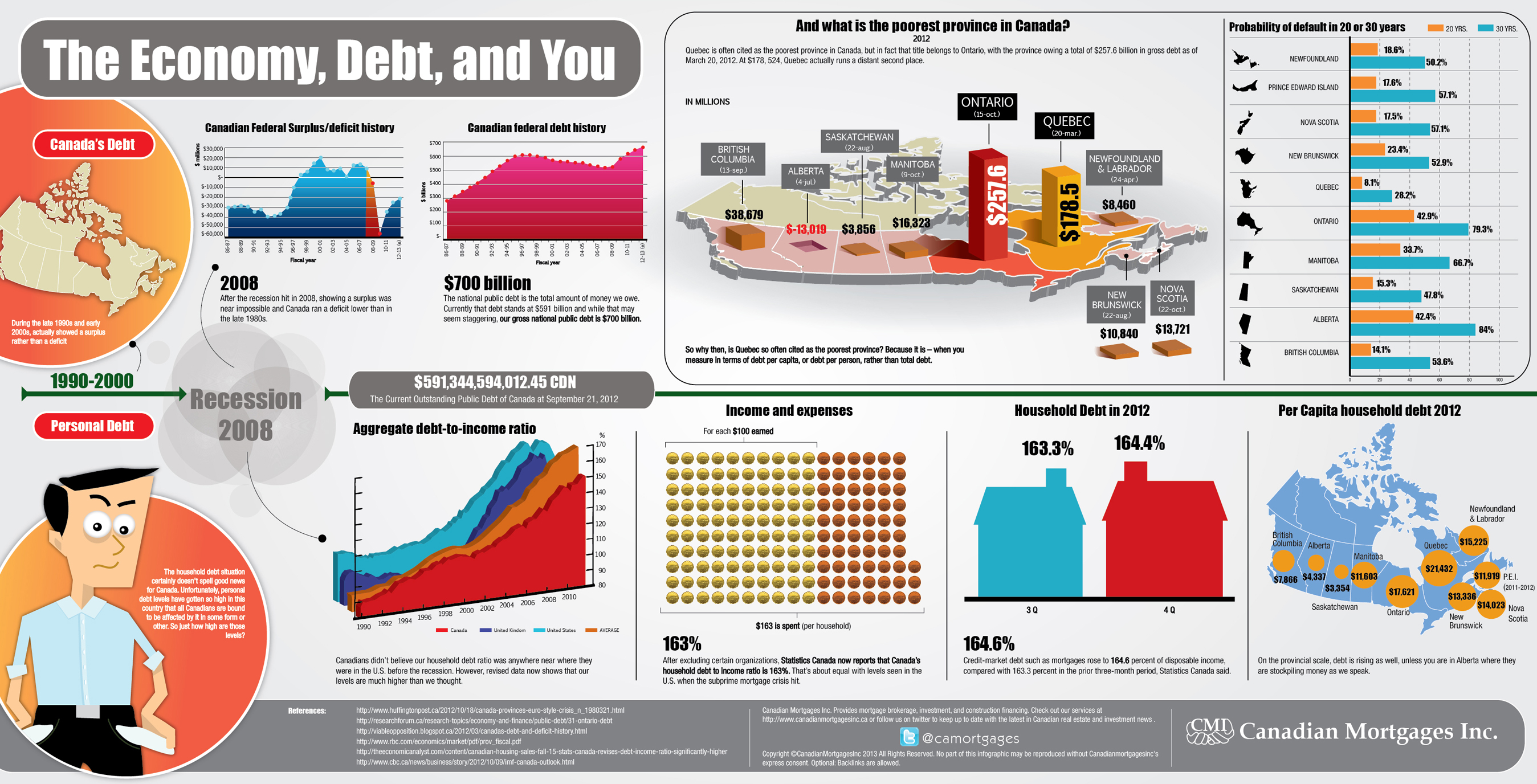 The Economy, Debt and You

Canadian Debt Infographic: The Economy Debt, and You

It’s no secret that Canada’s national public debt has taken a huge hit during that last several years and that that has trickled down into households, and the average debt per capita. But just how has our country gotten into so much debt?
And what does this mean for Canadian households?

Canada does unfortunately have a long history of debt; although the fiscal years of 1996-1997 until 2006-2007 proved to be profitable for Canada, with the country showing a surplus during these years. Currently our net public debt stands at $591 billion; while our gross national debt, without exclusion of assets, is $700 billion.That debt can be broken down into provincial debt, but which province is actually the poorest is debatable, depending on the variables being referred to.

Ontario, with $257.6 million of debt, is the poorest province, or the province with the total amount owed. Quebec comes in second, owing $178.5 million; and Alberta is the wealthiest province, with a surplus of $13,019 million. However, when it comes to the total amount owed per capita, it’s Quebec that emerges as the winner. While Ontario’s residents have a debt per capita of about $17,621, Quebec stands at $21,432 per person.

Still, you can’t always tell just by looking at final debt figures which province is doing better than another. Although Ontario and Quebec can be considered “the poorest” depending on varying factors, you also need to look at any given province’s ability to pay back their debt. Ontario is one of the winners here too,with the chances of loan default in 30 years at about 79.3 per cent; and the probability within 20 years at 42.9 per cent.

But, even though these provinces took the cake when it comes to debt per capita and total debt, Alberta – the province with the surplus the last few years – is actually most likely to default on their loans. In 30 years the western province has an 84 per cent chance of default; while in 20 years it drops to 42.4 per cent.

The total debt owed by the country and the provinces within it can certainly become discouraging and unfortunately, it doesn’t get much better when you whittle that down to household debt. Currently, the average household debt ratio stands at 164.6 per cent, meaning that for every dollar Canadian households bring in, they owe $164.60. This number is up in the fourth quarter of 2012 from where it was in the third when it sat at 163.3 per cent.

It’s clear that Canadians are living beyond their means; and that in fact, we have been for some time. Even before the third quarter results came out, it was shown that Canada’s household debt ratio was much higher than it was previously thought. During the second quarter it was believed that the ratio actually sat somewhere around 153 per cent. After some revision of the data by Statistics Canada however, it was found that we’re much higher than that. Proving that now is the time for Canadians to really get a handle on their debt, before it’s too late.