Canada’s housing market remained robust in March, as demand for multi-unit dwellings trumped rising unemployment and slower wage growth that could make it more difficult for households to afford homes.

Canadian housing starts climbed 28.8% in the 12 months through February to reach a seasonally adjusted annual rate of 212,594, the Canadian Mortgage and Housing Corporation (CMHC) reported March 8 in Ottawa. The increase crushed estimates, which called for a year-over-year gain of 9%.

“The national housing starts trend held steady in February, despite some important regional variances,” said CMHC chief economist Bob Dugan in a statement. “Housing starts are trending at a 4-year low in the Prairies where low oil prices have weakened consumer confidence. At the same time, starts are trending at an 8-year high in British Columbia, as new and resale home inventories remain low.”[1]

Housing starts, which are an important indicator of demand for new single-family homes, continue to soar in urban centres like Toronto and Vancouver where new condominiums are remaking the skyline of two of Canada’s largest cities.

The CMHC data clearly show a growing divergence between the booming provinces of Ontario and B.C. and the recession-weary Prairie region, which has been hit hard by collapsing oil prices. Housing resales in this region have declined sharply since the onset of the oil price collapse in 2014.

The housing picture wasn’t entirely rosy at the start of the year. A separate indicator of building permits that is considered a bellwether of future construction activity declined faster than forecast in January, a sign homebuilding could level off toward the spring.

Building permits declined 9.8% month-on-month in January after surging 11.3% the month before, Statistics Canada reported March 8. A median estimate of economists called for a decline of 2.5%.

The Bank of Canada (BOC) held interest rates at 0.5% in March, as the combination of global financial tumult and a weak domestic economy kept policymakers on the sidelines. The Bank said in its official policy statement that “the near-term outlook for the economy remains the same as in January,”[2] when it predicted the economy to grow by about 1.5% in 2016 and 2.5% in 2017.

The BOC cut its benchmark interest rate twice last year in an attempt to support an economy that was hit hard by falling energy prices. While oil prices have rebounded around 50% from their mid-February bottom (figure 1), the recovery hasn’t been robust enough to sustain high cost production in places like northern Alberta. According to commodity analysts, oil prices are expected to remain very low for at least the remainder of the year.

Although the Canadian economy remains well below full capacity, it appears to be responding to the BOC’s low-rate stimulus. Canada’s economy expanded for the fourth consecutive month in January, this time at the fastest pace since 2013. Gross domestic product (GDP) – the value of all goods and services produced in the economy – expanded 0.6% in January, Statistics Canada said March 31. The figure was much bigger than forecasts, which called for a 0.3% gain.

The increase is an extension of a mild recovery that began in the second half of last year when Canada emerged from a technical recession, which is defined as two consecutive quarters of contraction (see figure 2). The combination of a weak loonie and rising US demand have supported a broad pick-up in manufacturing, which is seen as critical in lifting Canada out of its oil-induced funk.[3] 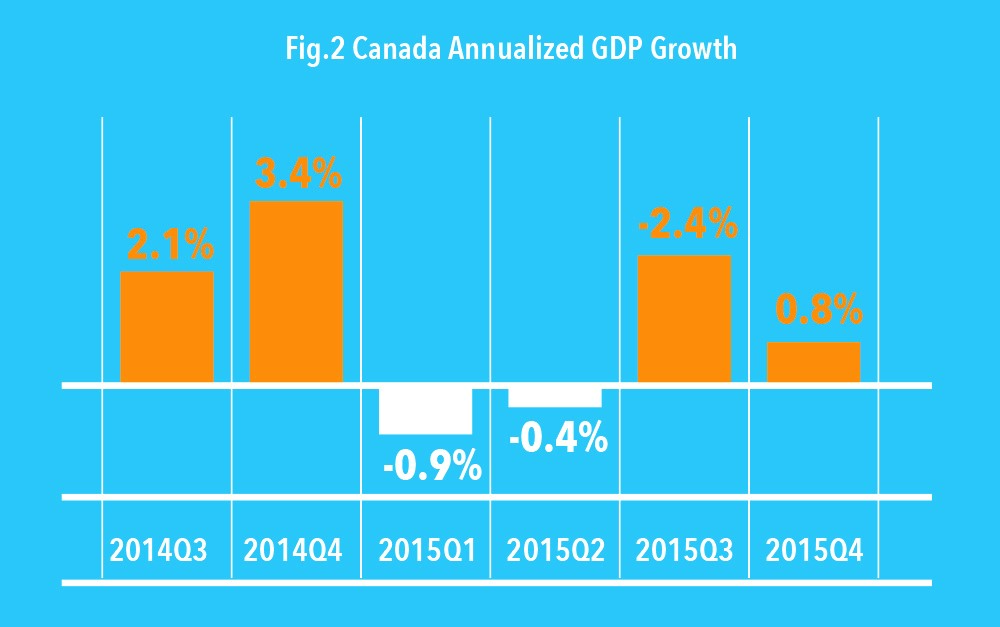 Despite the rebound, growth remains moribund and well below the average for comparable nations. Canada is expected to trail other advanced industrialized nations through 2016, according to latest forecasts from the International Monetary Fund. What’s more, Canada’s unemployment rate surged to three-year highs in February as oil-hit Alberta continued to shed jobs.

Canada’s unemployment rate rose to 7.3% in February, government data showed March 11. Employment declined 2,300 from January, as gains in part-time work were offset by losses in full-time employment.[4]  Meanwhile, average hourly earnings rose by just 0.4% in the 12 months through January, down from 0.7% in December, latest data show.[5]

Low mortgage rates fueled demand for housing through the first two months of the year, as Canadians continued to lock-in at favourable rates. Conventional five-year mortgage rates averaged 4.64% in the first quarter, unchanged over year-ago levels. One-year commitment rates increased 25 basis points last October, but have held steady ever since. 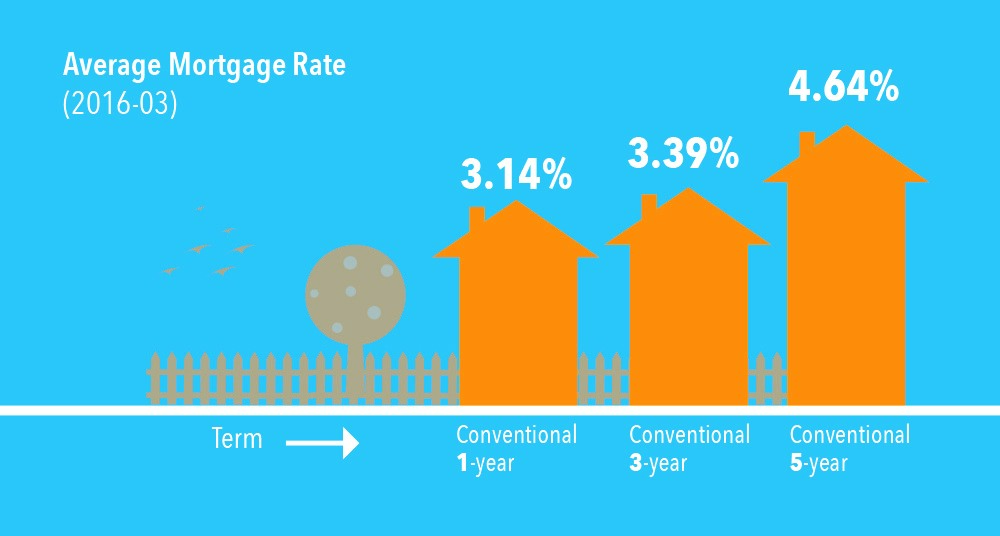 One-year mortgage rates are expected to hold steady through the first three quarters of 2016 before rising by 10 basis points in the final three months of the year. The rate on five-year conventional mortgages is expected to hold steady at 4.64% throughout the year, which will likely continue to fuel demand for housing. While rates are expected to pick-up slightly in 2017, mortgage terms will remain highly accommodative as policymakers look to enable growth in a slow economy.[7]