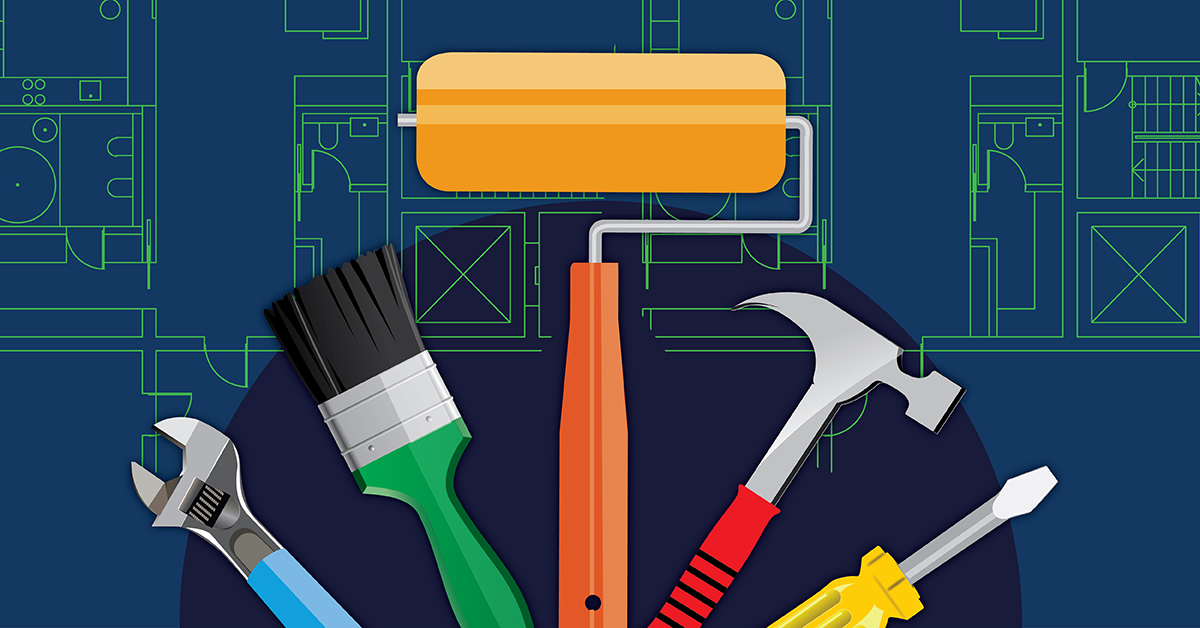 According to a CIBC poll, only 32% of homeowners who’ve decided to renovate came up with a detailed budget. That’s only half the story. Of those who recently renovated, 39% went over budget.

For those who intend to stay in the residence, a home improvement project, whether or not it is necessary, can positively impact the quality of day-to-day living. For investors, renovations are meant to improve a property’s saleability and increase its value. With such tempting benefits, it is no wonder why nearly half of the homeowners who participated in the survey intended to renovate despite indicators pointing to a more challenging market.

With construction costs on the rise, homeowners and investors alike need to be strategic about renovating, and their considerations need to go beyond a working budget. Prioritization is paramount, and it is a matter of both necessity and value. Beautiful double doors won’t matter if a waterproofing issue has resulted in stained walls and rotting floors.

Bathroom renovations are some of the most popular home improvement projects. Homeowners understandably appreciate better bathrooms, which may also increase the asset’s value. On average, remodelling a bathroom sets owners back around $150 to $250 per square foot, making it extremely expensive. However, this type of renovation also offers one of the highest rates of return at 70% to as much as 100%. This means that if you spend $11,000—the average cost of remodelling a bathroom—you may be able to increase your asking price and earn back the full $11,000 from the improved sale.

In terms of increasing the property’s value, however, kitchen remodels outperform every other kind of renovation. According to a 2018 survey conducted by real estate giant Royal LePage, a new bathroom has the potential to add between 2.5% and 12.5% in value, while a remodelled kitchen adds over 12.5%, making the latter the most value-adding upgrade.

Not all alterations have to be expensive, however. A fresh coat of paint is much less costly and structurally disruptive, but it makes a big difference to a potential buyer’s eyes. On average, professional paint jobs cost $2,080.80 and have a return rate of 50%-100%. Painting is also a common DIY project, and with paint and a few other materials as the only expenses, the job may only cost a few hundred dollars. In terms of value, more minor improvements like this pack a big punch.

Swimming pools, on the other hand, are one of the most popular and expensive additions about which most potential buyers don’t seem to care. The same Royal LePage survey found that pools add less than 2.5% to a property’s value. Moreover, pools may actually turn off buyers with families because of the hassles and higher costs of maintenance and the drowning hazard for children.

Understanding the market should be part and parcel with the decision to renovate. Many homeowners and investors rationalize indulgent works on the basis of adding value, but often these additions are unnecessary and inconsequential to actual buyers. In this regard, market research is essential because it presents the cold, hard truth. You may prefer a swimming pool and rationalize it by telling yourself that upscale buyers will expect it from an upscale house, but if all the other homes in this particular neighbourhood have decks instead, it may be more prudent to invest in the latter. In a CNBC article, Angie Hicks, the woman behind the review site Angie’s List, states, “Look for projects that keep you in line with the Joneses.” Especially for owners who mean to sell, indulgence is a vice, and one must choose what to add or alter based on market dictations and not personal whims.

While a renovation is still cheaper than buying a new house altogether, it is still a sizable capital expenditure that often needs to be financed with credit. The most cost-effective way to fund a renovation is to borrow against one’s home equity. HELOCs are one of the most popular funding options, but they tend to negatively affect a homeowner’s borrowing behaviour. Since one can keep borrowing against the maximum credit every time a portion of it is paid down, and HELOCs are interest-only loans, borrowers often find themselves carrying the principal for longer periods than initially intended. As for traditional lending facilities, most banks will be averse to approving second mortgages, which carry more risk and demand higher interests. Private lenders fill these gaps by having a more tailored approach to financing.

Taking on additional debt against one’s home equity is a risk, especially if it’s in the form of a second mortgage. Thus, renovations warrant a realistic budget and a strategy. “We have noticed that homeowners tend to underestimate project costs in relation to industry standards on average. This year, we found that only 20% of homeowners set realistic budgets for kitchen renovations, which were the sixth most popular project in the country,” says an article by TrustedPros, a Canadian search engine that matches clients with contractors.

A home improvement that tanks one’s credit and cash flow may not be that much of an improvement. Owners and investors will have different opinions on what constitutes value, but being cautious with major expenses like renovations should be universal. With the right approach, property owners can build on their existing assets, maximizing value and potential.