When (and How) to Use Second Mortgages

If you’re a homeowner, deciding whether to extract equity from your property is one of the most important decisions you’ll ever make. If you leave your existing first mortgage intact, and look to add another loan on top, this is what is known as a second mortgage. This is a potentially powerful financing options for homeowners with a lot of equity or those struggling to qualify for an unsecured loan.

The motivations behind second mortgages vary, but are generally considered when a borrower needs a lot of money quickly. This could be to renovate their existing home, purchase an investment property, consolidate existing debt or secure bridge financing. The combination of lower interest rates, tougher economic conditions and higher chances of missed loan payments are compelling more homeowners to consider acquiring a second mortgage.

The gloomy news headlines talking about a slowing economy are beginning to affect Canadian families. According to Statistics Canada, the nationwide unemployment rate was 7.1% in April[1] after surging to a nearly three-year high in February.[2] While foreclosure rates remain low, a sustained period of high unemployment and stagnant wage growth could put more homeowners in arrears. 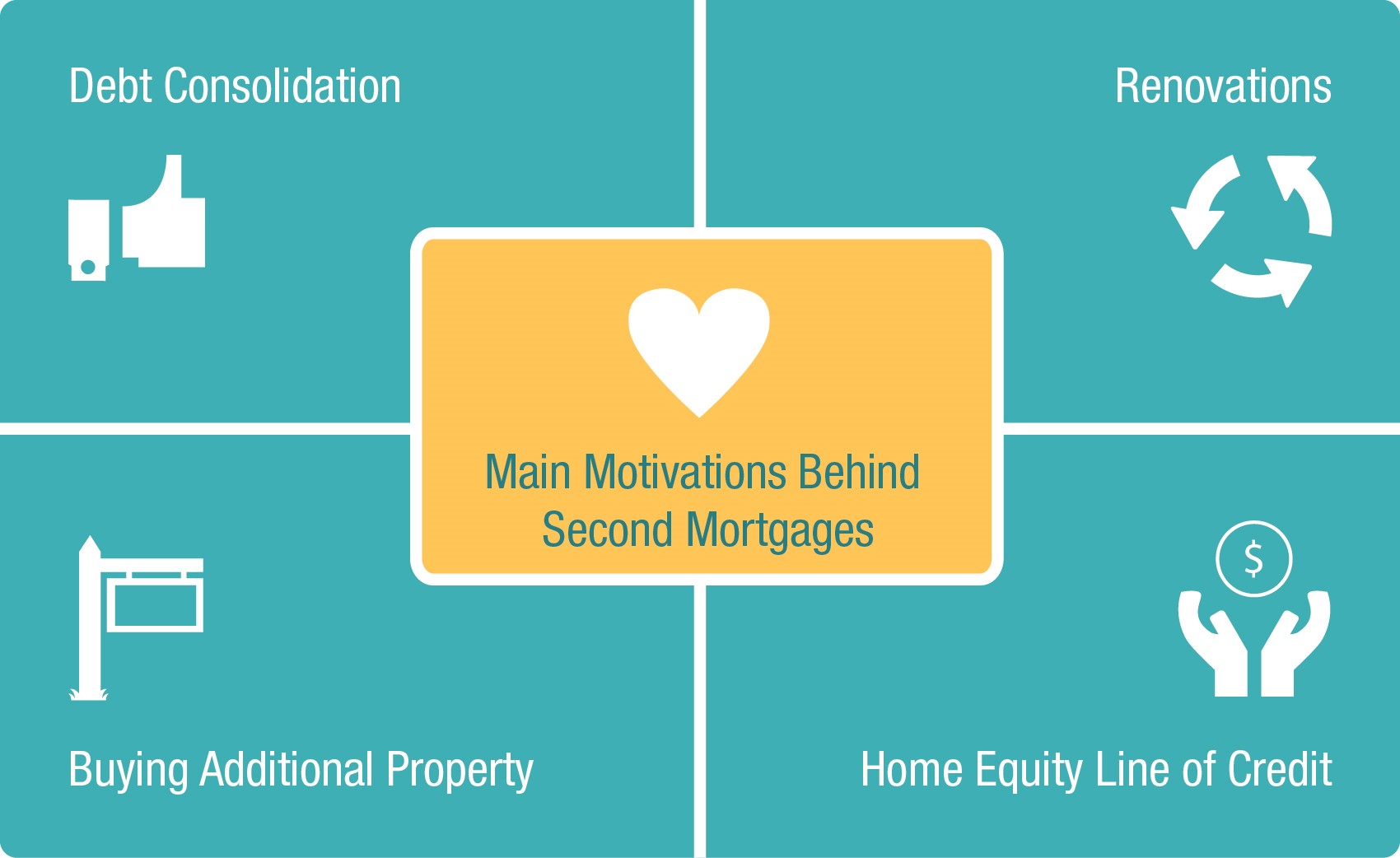 Do I really need a second mortgage?

Before going down the second mortgage route, homeowners need to ask whether there are alternative financing options out there that can meet their needs or help them achieve their goal. Deciding whether to put your home up for collateral is an extremely important decision that should not be taken lightly. Some alternatives to second mortgages include personal loans and cash advances. Borrowers with good credit generally qualify for these types of loans, even though they generally carry higher interest rates than secured loans like second mortgages. However, these options are usually limited in the loan amounts offered. After all, it’s highly uncommon for a borrower to get approved for a $50,000 credit card overnight. That’s why second mortgages are so attractive.

In deciding whether a second mortgage is right for them, borrowers also need to consider how they are going to pay it off. That is, will you pay off your second mortgage when you sell the house or roll it into your lower interest rate primary mortgage when the time comes to renew? Taking on any type of loan without an exit strategy is never a good idea.

How to secure financing

Homeowners who decide to do a second mortgage usually have a choice between three types of lenders to secure the loan – a major bank, trust company or private mortgage lender. In general, major banks offer the lowest interest rates, but also have more stringent lending criteria, such as higher credit scores and higher equity requirements. For these homeowners, the choice is usually between a trust company and private lender (see the table below for a comparison).

In addition to credit score and equity, lenders will also assess the borrower’s ability to repay the loan. This usually requires proof of employment, primary mortgage documentation, proof of income and bank statements, among others. In this sense, the second mortgage process isn’t much different than securing a primary mortgage.

In general, homeowners in better financial health will be better positioned to receive more attractive financing options. This is true regardless of the lender. However, many private lenders offer a wide range of second mortgage terms that can be adjusted to meet the needs of the borrower. For that reason, second mortgages are no longer considered a last resort, but a viable option for those looking for large, immediate cash flow. Private lenders also allow homeowners to avoid large breakage penalties on their first mortgage.

Although there is a general perception that second mortgages have high closing costs, they’re usually not much different than closing a primary mortgage. Borrowers should expect to pay for broker, lender, appraisal and legal fees, as well as title search and insurance. However, even with these fees, the benefits of second mortgages far outweigh the costs when one considers the credit repair, cash flow advantages and savings associated with avoiding the first mortgage penalty.

Government mortgage guidelines: What you need to know

Interest rates in Canada may be at rock-bottom, but government mortgage lending guidelines are tighter than before. This means the big five banks are more selective about who they lend to, especially in the case of a second mortgage. This has created more room for private lenders to enter the market to serve the clients that the major banks have turned away. Private lenders already account for around 5% of Canada’s overall mortgage market, which is equivalent to about $1.1 billion or 2% of total mortgage lending by dollar value.[4] According to various estimates, home loans from private lenders alone are growing 25% annually. 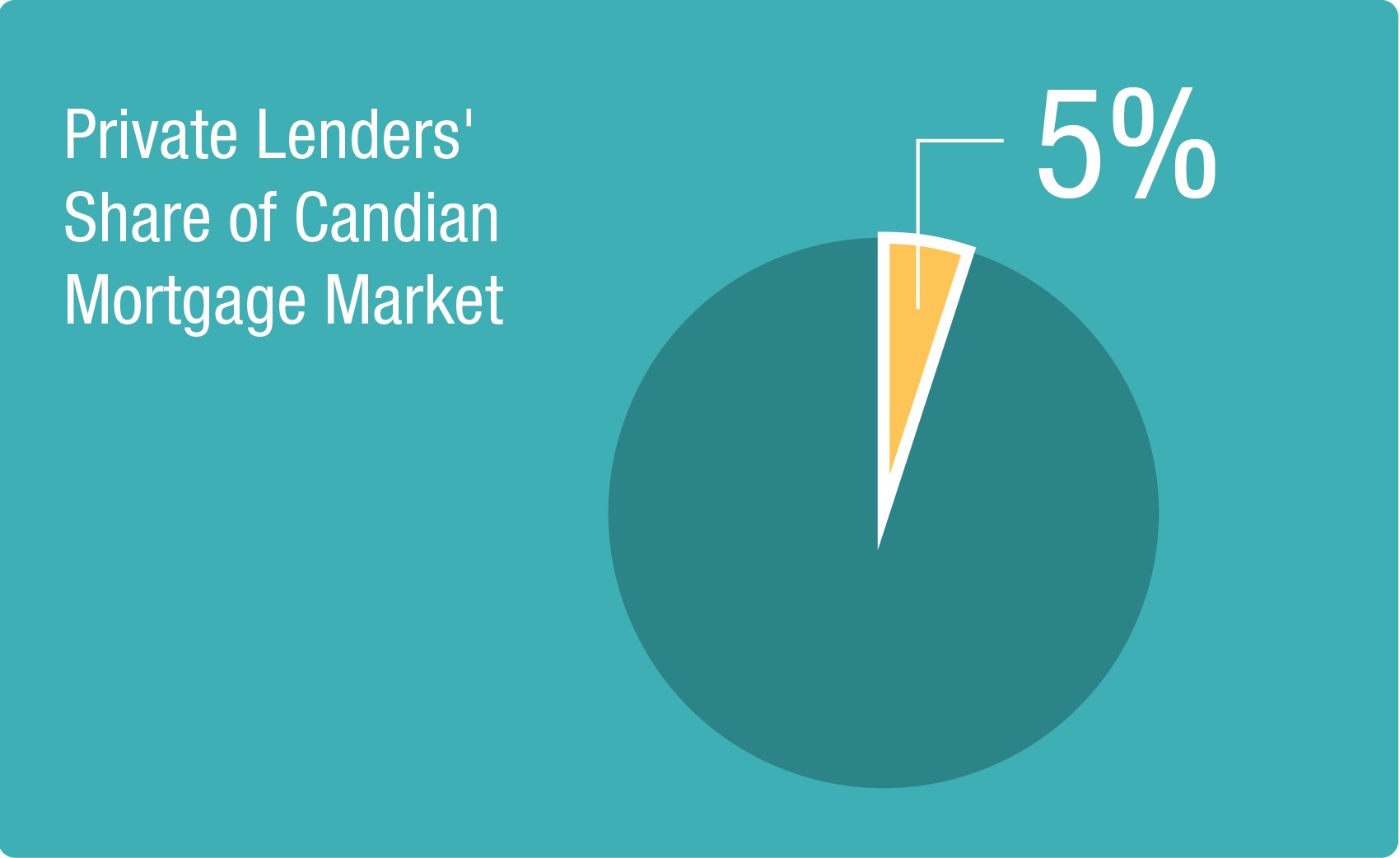 New lending regulations are also making it easier for private mortgage investment corporations (MICs) to raise capital, a sure sign that homeowners will have even more financing options. According to industry insiders, this process will encourage more bundling of regular mortgages and second mortgages.[5]

In other words, borrowers can expect to see even more options when it comes to home financing. As private lenders increase their footprint in this space, the potential for a more competitive financing market will emerge. We are already beginning to see it in the secondary mortgage market.

[3] CHIP Reverse Mortgage. A Second Mortgage, What It Is And How It Works?